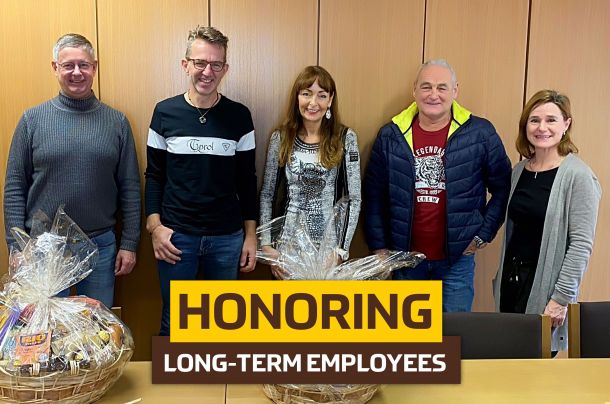 It has become a tradition that TROGER HOLZ honors its company anniversaries in the festive setting of the annual Christmas party. Since the company celebration for the 200th anniversary of the company could not "take place" this year due to Corona, the traditional Christmas party had to be dispensed with. The Troger family thanked the jubilees in a small circle for their personal commitment and for the many years of solidarity with their employer.

With Karl “Charly” Klingler we had two reasons to celebrate: his 25th company anniversary and his 50th birthday, which he was allowed to “douse” a few weeks ago.

When Charly joined our company as a fitter in 1995, nobody - especially not guessed - had any idea what career path he would take. His motto in life can be best described with a quote from Henry Ford, who explained: “Don't look for mistakes, look for solutions.” And so after a short time Charly took over the production management in the panel factory and also distinguished himself for more than a decade responsible for the sawmill. KR Helmut Troger thanked him very much for his achievements and his commitment. "Thanks to his professional and human competence, Charly has made a significant contribution to the numerous successes of TROGER HOLZ and we look forward to many more years of trusting cooperation."

Spending 35 years in a company is no longer a matter of course. With his retirement, Wolfgang “Wolfi” Lechner is not only underscoring a formative time in a working world, but also paving the way to uniqueness through his humor and creativity. Even between stress and hectic there was something to laugh about when Wolfi was there. Wolfi is a real bundle of energy and was a real asset to the team. "For the many small and large things that we have been able to experience together with Wolfi over the years," said company boss Helmut Troger, thank you. “Enjoy your retirement. Stay healthy and happy and enjoy your new life! "